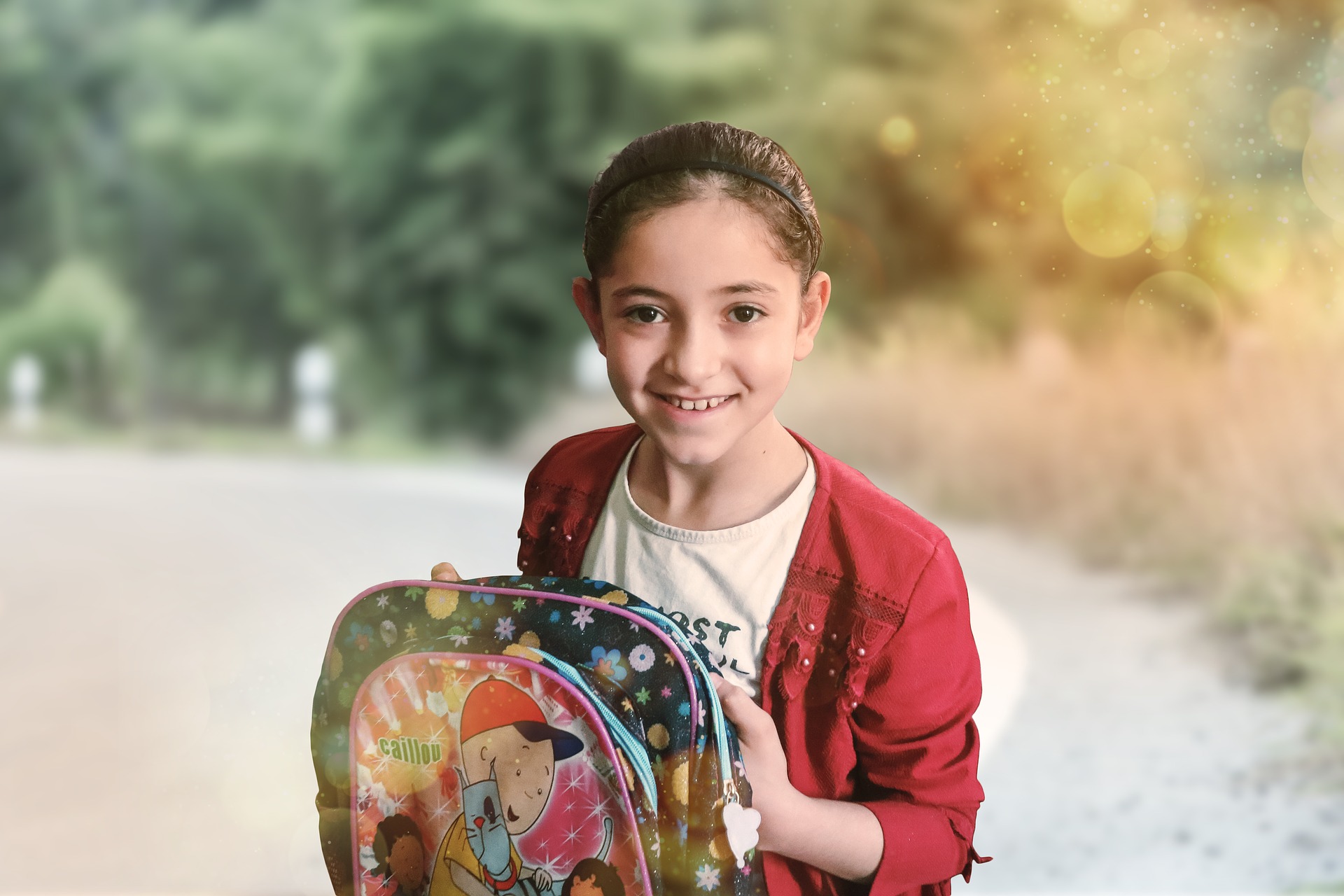 In this article we are going to tell you a short story about first day of school. The title of the story is “Starting step of being educated”. So here we go… Nitya was very excited as well as much tensed throughout that day. She was pondering the whole time about what is going to happen the next day. She had joined at Indian International School nearby her home in Mumbai and it was her first day. Although she had been to preschool and had the experience of mingling and enjoying with others, she still knew the fact that school was entirely different from the preschool in which she had gone too.

“Ma is it necessary that I should go to school tomorrow?” asked Nitya.

“Why dear, why are you asking like that now?” mother replies giggling.

“Nothing Ma, I’m just scared a bit, I don’t want to go to school tomorrow. I think I still have more time to join school”.

“You don’t need to think like that. Even when I was a child, I too had such tensions in my life. I used to go and cry beside my mother and she was the one who gave me the confidence to go to school. Because of the forcing I got from my mother that day, I joined my school, studied hard and now I’ve become a college lecturer. Same like that, I know my sweetie will also study hard and will become successful”.

Nitya even after hearing all the talking from her mom, she was still scared to go to school. She kept on thinking about different things she might face at school. She was happy about the fact that she will be able to meet new friends. But, she had also heard that the teachers were very strict it in that school and they will punish all students if they even commits a small mistake on their own. At that very moment, Nitya’s dad had come back home from office. She thought she’ll once again give a try by talking to her day and went to him.

“Nitu, haven’t you slept? It’s already going to be 10. Your school starts tomorrow and you must wake up early. Go to your room and sleep”.

“Pa, I want to ask you something”.

“What is it Nitu?”Asked her dad.

“Pa, I heard that the teachers of my school are very strict and they will punish you even if you commit a small mistake. Should I go and study in such a school?”

“Who is telling you stories like this Nitu? There is nothing like that. You’re just a small student who’s going to join in the kinder garden class. They will not punish you for such small matters. All such punishments are for higher class students and that’s only if these students do something that is against the school rule. Also, you must know that punishing children in school is punishable by law and as you see in your cartoon shows, the police will come as soon as possible and will arrest your teacher”

A smile comes up on Nitya’s face hearing this.

“So, even if I do something wrong, they will not punish me?”

“Not like that. That does not mean you can do anything you want. You must obey your school rules”

Nitya listened to her father’s words. She realized that she had no choice other than going to school the next day. She could not sleep for a long time. How will the school be? Will she be able like it? Will she get good friends? Will she be punished in case she does something wrong? These were the questions that were going through her mind throughout. She even got a bad dream of her being bullied at school the first day itself.

The sun had risen the next day. Nitya woke up early from her usual time of waking up. Her mother had prepared her breakfast and it no time she was ready to go school. She had no interest in going to school which could be easily noticed from her face itself.

But, she also knew the fact that she had no other choice than going to school. So, she was forced to leave. The school bus arrived in front of her house. With a little bit of hesitation and sadness, Nitya entered the bus. Few drops of tears had started to fall from her eyes but she was able to control it. As she entered the bus she saw few children of her age staring at her. Few of them were laughing, another few were crying, and some were enjoying the views outside.

Out of all of them, Nitya found a girl of her age sitting alone in a seat and smiling at her. Nitya went next to her.

“Can I sit here?” asked Nitya

“Yes you can sit” replied the girl

“Hi my name is Nitya Kapoor, what’s your name?”

“My name is Parvathi Adithya, you can call me Paru”

“Is this your first day at school” asked Nitya with eagerness.

“Yes and I know that it’s your first day too”

The two girls spoke to each other throughout their way to school. The school bus arrived in the school and they both got out of the school. The students who had come as new admission were asked to proceed to the school hall. The principal had come and spoke to all the children. Nitya did not listen to any of the words said by the principal as she did not understand anything he said. She was observing the whole surrounding across her. She could see the whole big corridor, she could hear of other students making noises in their class. She started to feel that she is about to start something new in her life.

After the long speech of the principal, the students’ names had been called out by the respective class teachers and fortunately Nitya and Paru happened to be in the same class. They both walked together to the class and sat together in the third row of the bench. The class teacher came along with the students to the class. She spoke to the class and Nitya had liked the teacher. Yet, even in the middle of the class Nitya was still lost in the thoughts of her home and her parents. She wanted to go back home and hug her mother, but she knew that she could not do that. She tried speaking with Paru, but still that didn’t work out. Later, she was asked by the class teacher to give an introduction about herself which she done perfectly because her parents had made her practice it the previous day. She met all her new friends and mingled with them. But, even in middle of all these conversation, she still wanted to go back home and was missing her parents so much.

The whole day went by and it was time for them to go back home. Nitya was very eagerly waiting for that moment and she ran to school bus along with Parvathi. The bus had started their return journey, but on the way back, the bus got broken down due to engine failure and they had no time to repair it. They all were stuck on the road. But, Nitya realized that the bus got broken down at the place where her house is just at a walk able distance itself. So, she and Parvathi started walking to their house.

Those two girls were walking like two free birds in the sky by laughing and not caring about anything happening around them. Suddenly, Nitya’s eyes got struck on a girl probably of her own age walking towards them. The girl seemed to be from a poor background. She had worn torn clothes and seemed very shabby in look. She came and stood next to Nitya and Parvathi.

“Didi, do you have any money with you? I haven’t had anything today. I’m very hungry” said the poor girl.

Nitya and Parvathi did not know what to do since they were small kids.

“Even I want to go to school and study like you. I also need to be a good child like you. But, I don’t have my father and my mother is sick from the past two days. So, she was not able to cook anything for me. Please if you have anything to eat, give me as it will be a great help for me”.

Nitya and Parvathi were starting to get scared by now at the same time they felt very sad about the girl.

Suddenly a person in middle came and slapped that young girl.

“Hey, haven’t I told you not to get out of the house? Next time I see you outside the house, I will chop your head off”.

By seeing this Nitya and Paru got very scared and they ran to their houses. After reaching home Nitya told the things happened to her parents. They tried to calm her down.

“Nitu, listen to us. Now you have seen with your own eyes that there are people in this world who even after having the interest and urge to study are not able to do it. It’s not because they are lazy or they cannot do it. God has not given them as much as they have given us. We must be always thankful to god by realizing that he has not put us in such a harsh condition. You’re Papa and I am able to go to work and hence we have enough earnings to take care of you. Same way, you must also thank God every time whenever you are praying for giving you such a happy life with both your parents always by your side”.

Nitya had learned a big lesson on her first day of school itself. She realized that there are people who are having even worse condition of living and she is very lucky. She came to know that God has blessed her so much by giving her lovely parents.  From that very moment, she stopped her over thinking about her school and started to go to school along with Parvathi with a huge mind of gratitude towards God. Now, Nitya’s life of happiness begins.

This is a short story about first day in school. I hope you liked it.